Read more
We've added the Wild Earth Ranch Club Subscriptions, check it out! Get your beef shipped nationally, delivered locally, or come see us at the Beaumont Farmer's Market on Saturday mornings!

It's officially fall here in Texas, which means we're coming into stew season! In college, every fall I would drive up to visit my sister when she lived in Santa Fe. It was green chili everything, perfect weather, and I loved every second of it. Now I LOVE my traditional Texas chili with ground beef but I also like mixing it up with green chilis and shredded beef. Since this is a BEEF recipe blog, instead of the traditional pork butt, I used our richer (fattier) chuck roast cut into cubes. You can use our stew meat but you will find it a bit leaner than the majestic chuck.

I roasted and peeled a blend of sweet, medium, and spicy peppers and balanced their heat with citrusy cilantro, bright tomatillos, and sweet onions. Just like our Texas chili, the flavors in this dish are built up in layers. Season as you go, add ingredients in stages, and don't rush the stages. Now, that doesn't mean you can't cut mega time off by using an InstantPot just that it's going to taste better if you take the time to season and saute the veggies and brown the beef before the final cook. Adjust the heat to taste. 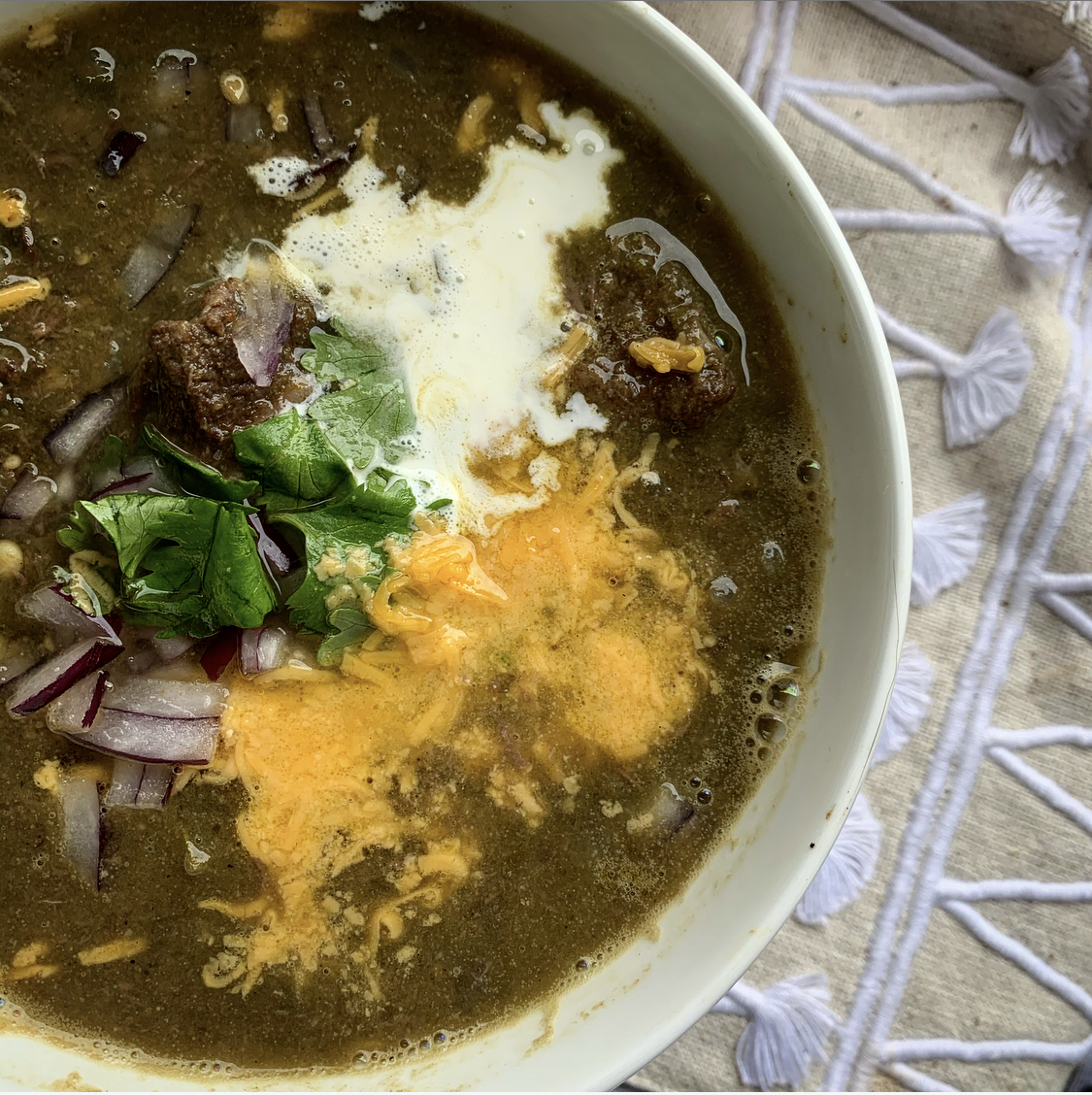 Chop the roast into large 1.5” cubes. Cutting out any thicker pieces of outer fat. Heat your pan with 1-2 T of oil or grease.

In a bowl, toss the cubes to coat in the masa and season well with salt and pepper. The coating will not only crisp the beef more but help to thicken the stew while it cooks.

When the oil is hot and shimmering but not smoking add the coated beef and sear well on all sides. Then set aside. Depending how much beef you have and the diameter of the bottom of the pan, you may work in batches. Crowded beef will steam rather than get the good crusty sear we’re looking for. That sear will add a caramel richness to your final dish

While your beef is searing place all of your peppers and tomatillos on a baking sheet. Turn the ovens BROILER to high and add the peppers to the upper rack. You won’t need to hover over them but don’t forget about them either. Oven broilers don’t mess around. We are going to be hard charring the skin of the peppers until they blacken, then flip them and char the other side. Mine took about 4 minutes a side but this will vary based on oven and proximity to the broiler. If you don’t have an oven broiler you can roast them over open flame or on a foil lined baking sheet at 450 for 15-20 minutes until the peppers collapse and the skins loosen.

When the peppers are done, place them in a zip bag or a closed paper bag to allow them to steam for 8-10minutes. This will make peeling so much easier and finish cooking them.

While your peppers are steaming, chop the onion and tomatillos and start on med-low with a bit of oil or grease while you finish prepping the other vegetables and peppers. Peel and smash the garlic and chop the cilantro, then set aside.

Remove the pepper skins and rough chop before adding to the pot. If the skins are a bit stubborn use a paper towel to help run them off. Once all the veggies are simmering along, increase the heat to medium and add the garlic, chopped cilantro, and all of your spices including an extra pinch of salt. Allow this mixture to come together and soften, stirring occasionally. 3-6min. If you won’t be using an immersion blender at the end, this step will help break down the veggies to incorporate for fully while stewing.

Add 4 cups of broth, the browned beef, and bring to a simmer.

This is a totally optional step but I loved the texture it produced! With a slotted spoon I removed about 3/4 or more of the beef hunks to a bowl. Then carefully inserted the immersion blender into the pot and gave it a whirl. It didn’t take but a few seconds to break down a lot of the veg and shred the beef. Add back in your beef cubes and serve!

I topped mine with fresh cilantro, cheddar cheese, and a little extra pinch of salt! Other compliments are fresh lime wedges, sour cream, and chopped green onions or garlic chives!